Generational Jabs in the Workplace

05 Aug Generational Jabs in the Workplace

Everyone knows that name-calling, teasing and other bullying behavior is unwelcome in the workplace.

But what if the comments are veiled in humor? Jokes about “old farts” or “screen-obsessed millennials” might seem like acceptable office banter to some, but these comments may amount to ageism and could seriously impact an organization—and should be quickly snuffed out when noticed.
This article explains some of the ways offhand comments can affect a workplace and outlines steps employers can take to combat their spread.

The Scope of Ageist Comments

Ageism is a prejudice against people of certain ages. These views are typically seen in flippant comments that call attention to someone’s age. In practice, these prejudices can limit productivity, stifle communication and expand interpersonal rifts. Like other prejudices, ageist comments should not be tolerated in the workplace. And, given the labor market forecast, employers should be acting now.
There will be 42 million workers over the age of 55 in the workforce by 2026, according to the U.S. Bureau of Labor Statistics. Employers who wait to address ageism issues will be significantly disadvantaged among this population.

Just like accusations of racism or sexism, some individuals may have different interpretations of an ageist situation. In other words, it’s sometimes difficult to prove that a comment or action was related to prejudiced views.
Regardless, employees should never have to question whether a comment or action was prejudiced—such behavior should be clearly defined as inappropriate. As such, here are some examples of ageist comments:
•     Using the phrase “OK, Boomer” in response to a colleague’s comment
•     Attributing a co-worker’s mistake to their age
•     Using phrases like “they’ve been around the block,” “at your age” or similar offhand remarks (no matter how innocuous the comments may seem)
•     Changing topics in a conversation and explaining it’s because one of the listeners won’t understand due to their age

Beyond interpersonal issues, seemingly harmless comments can leave room for age-discrimination cases. Age discrimination is a serious accusation, since age is a protected employment status (for workers ages 40 and older). Even though the burden of proof is on the employee, being faced with a lawsuit—regardless of fault—can be financially crippling. That’s why employers should do everything they can to address ageism and other discrimination periodically. Briefly addressing these issues in onboarding training may not be sufficient for protecting an organization from potential discrimination claims. 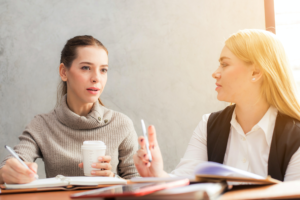 What Employers Can Do

Prohibiting ageist comments can help discourage their proliferation, but that doesn’t guarantee they’ll vanish. Prejudiced viewpoints may persist even if individuals aren’t speaking their minds. That’s why training can be valuable for reinforcing appropriate communication behavior.

Some employers are requiring workers to complete conflict resolution training as a way to combat ageism and other discriminatory views. In these trainings, employees can role-play and learn to see comments from other perspectives.

Other organizations are focusing on implicit bias training. This training focuses less on resolving apparent conflicts and more on informing participants of biases they may not know they have. This perspective can be especially valuable among diverse teams who are experiencing issues but are unsure as to the cause.

Getting employees to stop cracking jokes isn’t likely to happen. However, thoughtful training can make them understand how damaging some jokes can be.

Speak with Reseco Group for more information on this and other workplace topics.

This HR Insights is not intended to be exhaustive nor should any discussion or opinions be construed as professional advice. © 2020 Zywave, Inc. All rights reserved.

Sorry, the comment form is closed at this time.